Read on at your own discretion! Comments for this article have automatically been locked, refer to the FAQ for more details. For a long time I worked on laptops only my MacBook Pro that I bought in , now that I wasn't travelling so much and had the option of being able to play some games, a desktop seemed like a more attractive option.

Both of these cases are very similar however so the rest of the article should make sense no matter whether you got the former or the latter case for modding. The most important thing to remember is to enjoy your modding project and have fun doing it! Hope you found this post useful Igor Kromin. Other posts you may like Tweets Tweets by ikromin. Follow me on Another option would be to remove the G5's original aluminum standoffs, and then epoxy or JB Weld them in the correct placement for an ATX board.

A number of people have successfully done that. Interesting idea there mate, thanks for all your pointers. I'll see how I go with the standoffs Might just make a motherboard try like you have done I'm picking up my G5 case in a few days so we'll see how it all unfolds! Hey great build! I was wondering if you can still close the plastic cover or if the graphic card gets in the way? Also is it still possible to use the first PCI slot or is it too close from the divider?

Really great work, thanks for sharing! I cannot get the clear plastic cover back on, because it hits the GPU's power cables. If you have a graphics card with the power header coming out of the back rather than the top, the cover would fit just fine.


The first slot should be useable, but if I did use it I would probably put something in to insulate it against the metal, like a thin sheet of plastic. I saw the L bracket on the back of the case, but what did you use or do to hold up the side toward the front underneath the optical drive? Great work and congrats on the clean mod! Under the optical drive, the divider is held up by the original screws and standoffs built into the case. I did not have to add anything. Great to hear, thank you for the quick reply!

I've only got one stand off on that side that lines up with the tray, so I wasn't sure if that one would be enough to hold it without it bending. I forgot to mention, in addition to being supported by a standoff and screw, it is also held up by the PCI fan and front fans, which both clip into it.

Nice work! I'm in the middle of one myself. Do you happen to know the size of the screws that hold the upper divider to the left side of the case? I just went out and bought a T8 bit since my T6 was too small and T10 too big but it still isn't right. Thanks for the quick response. I finally found a T9 bit at Ace and it worked. Now if I can just find a drill bit that's close enough to the size of the perforations I'll be all set. Hi, Thanks for the picture and instruction. I am about to start the very same project. Could you tell me how did you get the locking mechanism and the top divider panel out?

Did you have to take out the hdd cage and hdd fan first?

I Can't seem to get those out either. I don't want to break them if there is an easier way to get them out.


Thanks a lot. Helped me a bunch. I keep coming back to your site for reference : Very Very helpful. Hi, I've just got my G5 hack running. The only thing I haven't done yet is the front panel and was looking for your advice. If I just plug the power button socket on my mATX board into pin 13 it doesn't power up.

It's like this with two front panels. I've read somewhere that the firewire needs to be hooked up for this all to work. Did you use firewire on your motherboard? I'm basically wondering if you could just give me a quick guide on the front panel connector cable. To get the power button working you will need to have the ground for either the USB or Firewire connected to the motherboard.

Hi Ben, I wonder whether you wanna be paid to do a G5 case modding? I really wanna have one of this case, but I don't have those tools used here, and especially I am not talented as you're. So, if you are willing to help me, I will be thrilled. You've inspired me to do this for myself! I've got a dead G5 just wasting space and so when I'm building my new pc in around June instead of buying a case I'll just use what I already have!

I'll be able to spend the euro saving on fitting the case out with noctua fans also which should mean coupled with the great airflow of this case it will run cool all the time.

I plan on using a tray to avoid that. I was wondering how the CPU case, "G5 logo", was mounted? By the way epic setup :D. Hey Ben, how many hours total do you think you spend doing this project? I have an extra G5, its way cooler than any PC case, just don't worry about going down a rabbit hole. I finished the project in 5 days over a holiday. I put in a pretty significant number of hours each of those days, but a lot of that time was spent figuring out how to do everything, not actually putting it together.

Hi Ben, this is a really cool mod, I'm planning on doing a similar build. I was wondering, what are your temps like and also noise? 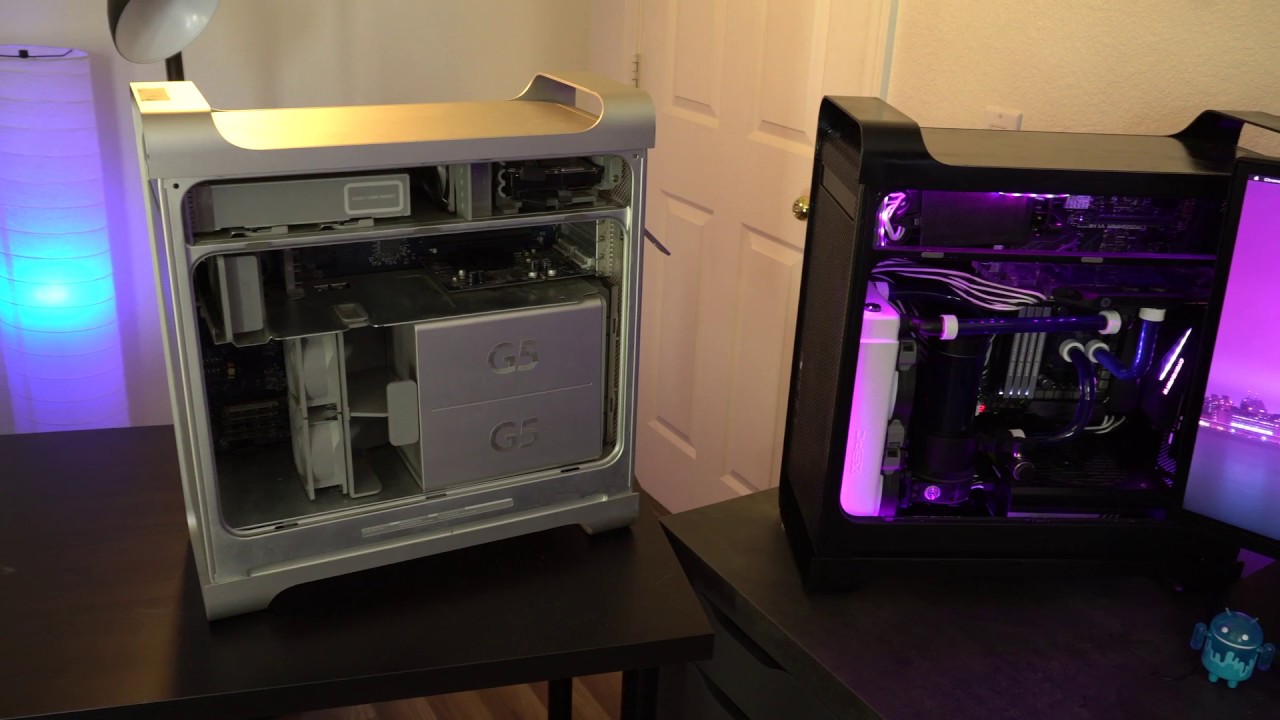 It isn't especially quiet, due to the number of fans, but the noise is on par with other similarly fan-equipped cases. Build commences shortly These G5's are built like tiger tanks! Thanx for the effort with the build info - definitely helps This project is awesome Thank You Ben for your thread. A friend gave me 2 fully functional G5s with one 23" Cinema Display. I'm hacking one and sold the other to 'pay' for my hack. I linked to your guide in my sales post for people looking to buy the case and mod it hope you don't mind because your guide is one of the most detailed and best illustrated.

I am successfully using JB Weld as others have, and I chose it because it has iron content in it, and I thought that might be a good thing when mounting the motherboard - although there are about threads out there arguing if you need the MB grounded or not.

So I split the difference and 'kinda' grounded it with the JB Weld. You can find him in the forums at www. Thanks, and good luck with your mod! The motherboard is grounded no matter how you fasten it to the case, due to it's many connections to the power supply's ground.

That is the reason why I said 'kinda' when referring to grounded. Amazing build ,you inspired me to go same with my G5 thank you for the sharing.

Can you also share the elcetric scooter you build? Again thanks alot for amazing project sharing. I didn't find the wiring diagrams that you linked to.